Latest information about council services, resources and the coronavirus 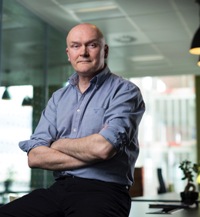 As Salford races to become one of the world’s most attractive cities for digital enterprise, The Mayor of Salford, Paul Dennett (alongside the Salford Digital Collaborative) has today announced the appointment of Jon Corner as the city’s first ever Chief Digital Officer (CDO).

Jon will play a leading role in the realisation of the city’s ambition to design and deliver a digital strategy that will make Salford the most attractive city for digital enterprise.
Delivering a 19% job growth rate from 2010-15 (87% of which is digital) and holding enviable digital assets, Salford has few equivalents. In 2017, it surpassed London as the UK’s leading city for percentage increase in start-up growth and much of this has been attributed to the growth of digital media, healthcare and enterprise in the region.

Hear from Jon about his plans for the role and how we’re bringing Salford into the digital age.

The appointment of a city Chief Digital Officer (CDO) to lead the digital transformation of Salford is a clear indication of the region’s ambition and desire to build networks and relationships across the wider region, supporting Greater Manchester’s aspirations as set out in the Digital Summits; encouraging collaboration between public and private sector, marketing the city’s assets and maximising value for residents, businesses and the economy with further inward investment.

Jon brings more than 16 years of experience in technology and digital transformation in both the public and private sector. In his role as CEO of The Landing, he set up and shaped one of the most successful regional and national tech clusters which, in the last three years has grown over 120 new companies and contributed over £89m GVA to the UK digital economy in 2017.

Raj Jain, Deputy Chief Executive of Northern Care Alliance NHS Group, has added, “Collaboration has always been one of Salford’s strengths and the appointment of a CDO extends that further into how we innovate collectively. It’s an important appointment for Salford and I welcome the knowledge, experience and energy that Jon will bring to the role.”

The Mayor of Salford, Paul Dennett said, “This role is crucial for Salford’s future as a leading smart city with digital technology and job creation at its heart. As Chief Digital Officer, Jon will become the glue for collaboration and impact and represent Salford’s interests both locally and internationally as a leading digital city.”

Jon added, “This new post offers an amazing opportunity to put Salford’s digital ambitions at the forefront. It’s an exciting challenge to fully harness the city’s potential and to identify overlapping agendas and collaborations in the region. I have some ambitious targets and with some significant pan-region projects already in place around connectivity, digital inclusion, cybersecurity, skills, health innovation and smart cities I’m confident we can make a big impact. ”