Abi really wanted to find a purpose, gain independence and most of all to get a paid job.

When she first came to us she had a lot of anxiety when faced with any changes to her usual routine. She struggled with complex information and needed tasks to be broken down and explained. She would seek constant reassurance as she lacked any self-belief. The Supported Internship was the perfect opportunity for Abi to gain that confidence and learn all the skills to enable her to thrive. 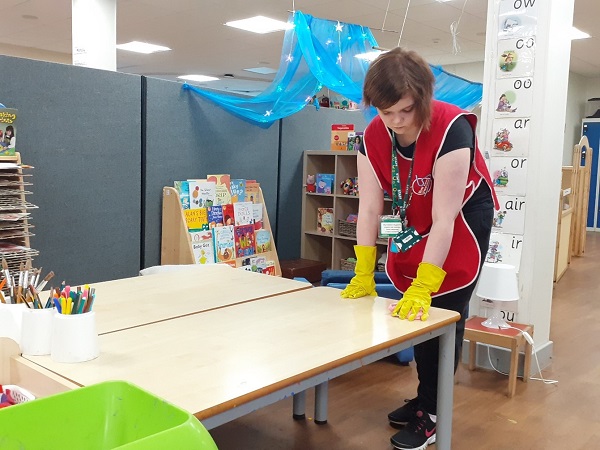 Abi didn’t know what she wanted to do at first, and other than her wishes not to work in a funeral parlour or that she might like to work in a school, we really didn’t have much to go on. We decided together with Abi that it would be best to experience different placements to help give her an idea of what she wants to do. Abi completed her first two placements as an admin assistant at Salford City Council and then as a cleaner at the Salford University Sports Centre.

Initially, Abi wasn’t sure that a cleaning role would be for her but she decided to give it a go and quickly found that she really enjoyed this type of work and the routine that it offered. However, one of her difficulties in this role was with her memory as she would sometimes forget where she was up to and what she had just cleaned. With the help of her job coach they came up with a system of putting a hair bobble on the last thing she had cleaned and then moving it along.

Everything was going well for Abi as she had two excellent reviews from her placements, her confidence started to grow, and she was developing her communication skills when the course had to be cut short due to the COVID-19 pandemic and the national lockdown.

Abi returned to the Supported Internship programme in September 2020 where the world looked very different. Many organisations were closed or working remotely and things like face masks and social distancing made the same issues that little bit more challenging.

Abi’s placement on returning was as a retail assistant at The Range. At first, Abi was very quiet and felt uncomfortable asking supervisors if there was anything she could do. She wasn’t really talking to anyone and kept herself to herself. This was another busy environment working within a large team and the public. Therefore, Abi’s customer service skills developed enormously. We noticed that she would struggle with changes to her routine like when asked to work in a different part of the store or when coming back from a holiday but with the support from the internship staff and job coaching, we helped Abi to get back on track.

“Abi has grown in confidence and matured during her time on the internship. She has learnt new skills in different work settings that has enabled her to gain paid employment. Each placement pushed Abi out of her comfort zone and this enabled her to cope better with new situations.”
Ross, Turrell Employment Officer at Pure Innovations

When a cleaning role came up at a local primary school, it looked perfect for Abi. She had enjoyed her previous cleaning placement and had expressed a desire to work in a school. Once Abi had been asked if she would like to explore the role further, it came out that Abi had attended North Grecian Street Primary School - which is now River View Primary School. Abi was extremely excited about the prospect of working there and thought she might know some of the staff.

A five week working interview was set up for Abi so she could experience the role with support from the supported internship. It also gave the school chance to get to know Abi in a more relaxed way and see what she is capable of. Abi impressed her colleagues and supervisors with her attitude and enthusiasm to work and she would never say no to a task. She was able to use the skills that she has learnt throughout her time on the course and shine during her working interview.

Abi got offered the job on her third week of the working interview and after the initial shock called her mum to tell her the news. Abi’s mum Kelly was undeniably proud and fighting to hold back the tears.

The support she has received from all at River View has been and continues to be amazing. A special mention should be made to Linda Gregory and Elina Parker for all their support during this process.

“I would definitely recommend the supported internship, I don’t think Abi would have found a job without all the support she’s had”
Kelly (Abi’s mum)

“Supported Internships is an excellent way for students to gain valuable work experience and for a potential employer to have the opportunity to get to know them and monitor them via a working interview, over a number of weeks. The support the students receive from the Supported Internship Partnership is exceptional.

"We are very proud to have employed Abi via this route especially when she was an ex- primary pupil in our Speech and Language Resource Provision. She has gone full circle with us and shows the success of the educational route that Abi followed, from primary to secondary to college and finally gained employment. She is now a valued member of staff at River View Primary School, with an excellent work ethic.”
Linda Gregory, Director of Business and Operations at River View Primary School

Stories like Abi’s wouldn’t be possible without Pure’s amazing partners, both in education and business. We’d like to thank all involved in the Salford University and Council Supported Internship programme, especially: