You are here: Home / Your council / City Mayor / Biography

Biography of the City Mayor 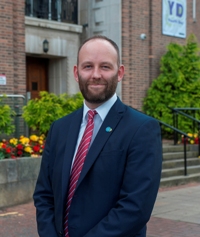 Paul Dennett was born in Warrington and brought up by a working-class family.

It was this background which had a huge impact on his politics, where money was tight and the stress of debt was always in the background. Families helped each other and he developed a lifelong appreciation for the public sector - healthcare, education and the ‘blue light’ services.

He attended Park Road Primary School and went on to Great Sankey High School in Warrington before moving to the University of Ulster and the Manchester Universities.

As a teenager he helped out in his parent’s pub changing barrels, lugging crates and talking to the regulars. After that he worked in customer services in a BT call centre, completed his degree and then lectured in Business at Manchester Metropolitan Business School.

Paul proudly served the people of Langworthy as local councillor before he became the second directly-elected City Mayor on Friday 6 May.

His interests include cooking, visiting the galleries in Salford and Manchester and travelling when possible.