You are here: Home / Your council / City Mayor / The role 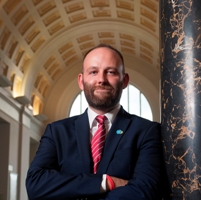 Directly elected mayors were introduced by the Local government Act 2000. Following a referendum in 2012, the people of Salford voted for an elected mayor and Paul Dennett is the second elected City Mayor – elected on 6 May 2016.

The City Mayor Paul Dennett leads the council and has overall responsibility for the delivery of all council services. The City Mayor is directly accountable to local people.

Salford's City Mayor will work with a Cabinet, with a legal minimum of three and a maximum of ten elected councillors, called ‘executive members’. The City Mayor allocates a portfolio of responsibilities to these executive members.

In consultation with the mayoral team, the City Mayor develops the budget to meet the needs of the city's residents and families, through the city plan. He will make sure the work of the council is conducted in accordance with the constitution and the law and that all decisions are open, transparent and understandable.

The City Mayor is the first citizen of the city and is responsible for developing strong working relationships with partners across the city, including community groups, businesses and the voluntary sector.

How often will elections take place for an elected City Mayor?

Elections take place every four years. The next election will be in May 2020.

Is there a Ceremonial Mayor?