A Victorian house with links to Blackpool Tower has been added to Salford’s local heritage list by Salford City Council.

Cleveland House at the junction of Eccles Old Road and Lancaster Road was built in the late 1800s and was owned by wealthy businessman William Hinmers who was a member of Eccles Congregational church. 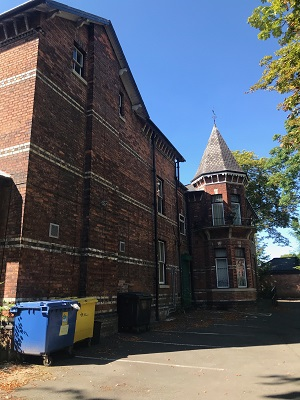 According to the Eccles Old Road website, William Hinmers (1821-1902) was born in Guisborough in the Cleveland area of Yorkshire. He came to Salford in 1837 and became a carrier – a haulage contractor who moved goods for other businesses, in this case by the Lancashire and Yorkshire railway William lived in Farnworth and Southport before returning to Salford and purchasing Cleveland House in 1878, a 14-room detached family home, By then he was a county magistrate, chairman of the Tyldesley Coal Company, a board member at Linby Colliery and Director of the Lancashire and Yorkshire Railway. William and another director paid for Horwich Recreation Ground in Bolton which opened in 1892, mainly for the staff of the railway company’s Horwich works.

In 1889 Manchester architects Maxwell and Tuke, who designed Blackpool Tower, designed a two-storey extension to the home with an unusual tower or turret feature on the eastern elevation, with a weathervane and decorative curved tiles on its roof.

The property was occupied by James Higson, a master painter and decorator, Salford councillor and JP from 1906 to 1926 and later by Thomas Osborne, a corn miller and hay merchant. It remained in residential use until the late 1930s when it became a nursing home. It was acquired by the local council in 1949 and remained in use as offices until 2021. It was put up for sale in October 2022.

Salford City Council adopted its local list in 2013 with eight criteria against which any building, structure or feature could be assessed to be included. These are: architectural interest, historical interest, age, aesthetic value, local interest, group value, landmark value and social or communal value. The listing will be taken into consideration in any future planning application to ensure future use remains in keeping with the character of the property.

“It’s a snapshot of Salford’s history – built in boom times just as we are seeing now, with the city rapidly expanding. It was owned by a man who came to the city to make his fortune and another successful tradesman who was local born and bred, but both gave back to their hometown and community.”