You are here: Home / Your council / News / News archive / News from February 2022 / Salford urged to respect not hate

Salford urged to respect not hate

Salford residents are being urged to report hate crime incidents after fears too many are simply putting up with it.

The number of actual incidents of hate crime is believed to be far higher than the number of reported cases.

Seven local people have spoken out about how hate crime makes them feel. (names have been changed).

Amman, a taxi driver, said he was not sure why people thought they could make threatening and hateful comments about his race or religion when he was driving them around.

“I am just doing my job to pay my bills. Other drivers say get used to it, grow a thick skin, but it happens often and every time it happens, I feel upset and sad for humanity,” he said.

After reporting it his taxi was fitted with a camera to deter offenders or capture evidence to pass to the police.

Joseph said he was just walking to the shop when a car slowed down and people started “hurling antisemitic abuse.”

“They were spitting and throwing takeaway rubbish at me, making a mess of my coat. They were laughing as they pulled away. I couldn’t see why it was funny and was really upset,” he said.

People nearby noted the car registration and Joseph reported the incident. The offenders were prosecuted and one lost their job as a result.

Bobby said the joy of moving in with his partner was ruined by “a vile, threatening homophobic note through the door.

“It made us feel unsafe at home. I don’t think people understand the effect hate crime has on people,” he said. He reported it to his local housing association which used CCTV to trace the person responsible The neighbour was warned they could lose their home if it ever happened again.

Mohamed, a local shopkeeper said teenagers hanging around his shop had gone from just being cheeky to shouting racist abuse, throwing eggs and stones and racist graffiti had been painted on the shop windows. After he reported it Salford City Council organised activities for young people to keep them away from the shop.

Luka, a trans man, fled death threats in his home country hoping he would be safe in the UK.

“I could no longer pretend to be a woman when I have known since I was a small child, I would be happier as a man. When I came to the UK, I thought I would be safer but I have been beaten and abused on many occasions. I just want to live in peace,” he said. Luka reported the hate crime and is now getting specialist support.

Ruby, a teenage Goth, said she had even received death threats.

“You always get online trolls who think they are clever – abusing people because they look different. When this happened to me, I ignored it and blocked the person but it started to happen more and more and really began to affect my confidence. I reported it and got support to help deal with it.”

Ben, who was born with cerebral palsy, said he regularly gets comments about his disability.

“I like to keep fit by swimming. One day kids started calling me names and mimicking me. You could say it’s just words but it’s wrong. It makes me feel like hiding away,” he said. After Ben reported it, police made sure those involved knew what they did was wrong and potentially a criminal offence.

Councillor David Lancaster, lead member for environment, neighbourhoods and community safety, said: “These seven brave people who have spoken out show hate crime hurts. There is no excuse for it and no-one should feel they have to put up with it.

“That’s why I’m urging anyone who experiences or witnesses hate crime of any kind to report it so they get the support they need and members of Salford Community Safety Partnership get a true picture of what is happening in our city and can work together to stamp it out.

“People can call Greater Manchester Police on 101, report online Through True Vision or visit one of our reporting centres across Salford.

"Social housing tenants should speak to their landlords and Greater Manchester Victim Services, provides free support whether or not the crime has been reported to the police.

"All reporting is confidential. You’ll get the support you need and your information could stop it happening to someone else.” 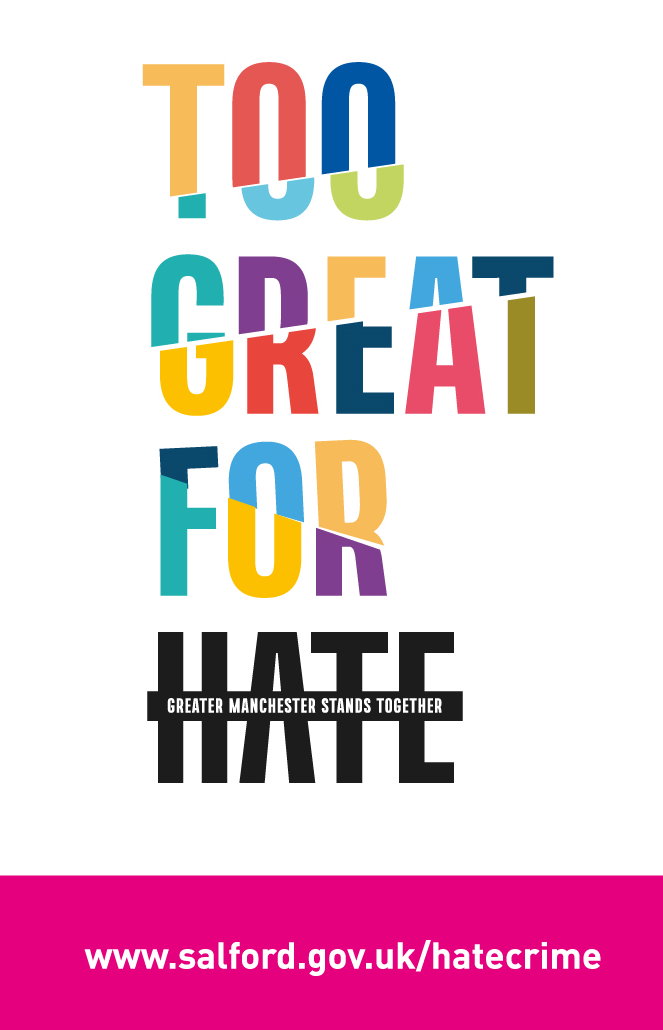