You are here: Home / Your council / News / News archive / News from September 2022 / Largest ever haul of e-cigs seized in Salford

Largest ever haul of e-cigs seized in Salford

Over 77,000 illegal e-cigarettes have been seized in a single raid in Salford – one of the biggest hauls ever made in the UK.

The vapes were taken from a business in Broughton in a raid by Salford City Council’s trading standards team which has now launched a criminal investigation.

As well as being unsafe, some of the products were also found to be counterfeit and a number of criminal and financial investigations into proceeds of crime are ongoing.

E-cigarettes must meet minimum standards for safety and quality, with clear and accurate safety warnings and instructions for use. They must be correctly labelled, with UK based producer or importer details displayed. E-cigarettes cannot have a tank size in excess of two millilitres (equal to roughly 600 puffs) and nicotine strength must not exceed 20mg/ml.

A spokesman for Salford City Council said “Switching to vaping can help some smokers quit completely but we strongly discourage any non-smokers from taking up vaping, particularly young people.

The e-cigarettes that have been seized have not gone through the required safety checks. Businesses in Salford selling e-cigarettes and e-liquids must make sure they fully understand and comply with the law including not selling them to under 18s. Our trading standards team will continue to take action against any who put public health at risk by ignoring or flouting the law.”

Information on anyone selling illegal vapes can be reported via Citizens Advice Consumer Service on 0808 223 1133. 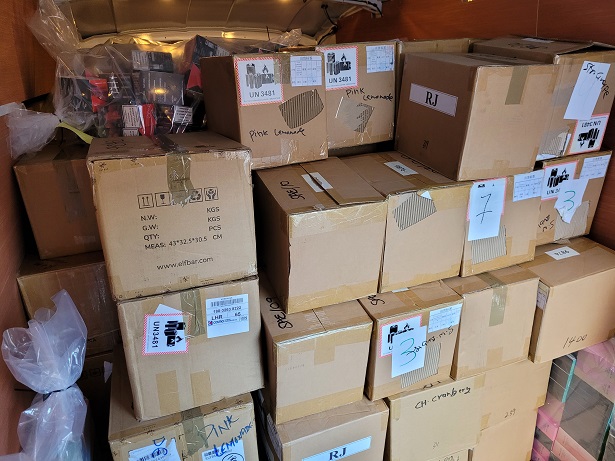