You are here: Home / Your council / News / Salford clubhouse is a winner

Salford clubhouse is a winner

A Salford rugby club has scored a true winner – a £1 million new clubhouse to take it through the next four decades.

Salford City Council provided the bulk of the remaining funding, along with support from Booths Charities, ForViva Group and Salford City Roosters. 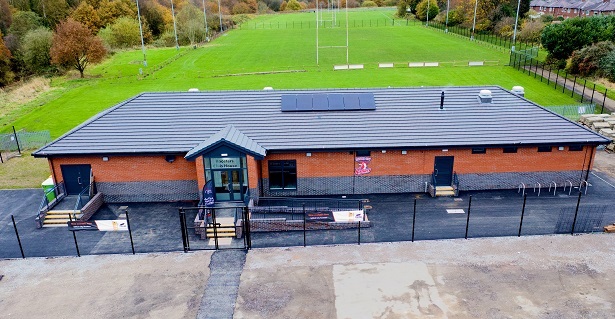 The new building, which replaces a former school turned sports centre turned rugby club base, will allow the club to create its first ever girls’ team, host more competitions and a new programme of community activities and events. It also pays tribute to former club secretary Alfrieda Kindon.

Chris Irwin from the club, which currently has seven junior teams and two open age teams, said: “We are over the moon to officially open our new clubhouse. It is a dream come true.

“We moved into our former base in 1983 and it was no longer fit for purpose. It was dilapidated, cost too much to heat and had to be replaced.

“With the new clubhouse we can develop new junior teams, including our first ever girls’ team, host more rugby league events and competitions and develop a really strong and varied programme of activities and events.

“We can be a true community hub, opening our doors for various activities for the local community which would include health improvement classes and meetings for local residents. The new catering facilities mean we will have a stable income stream to take us into the next 40 years.”

City Mayor Paul Dennett said: “We are investing in improving playing pitches and facilities linked to them across the city because we recognise how important sport is to people’s physical and mental wellbeing.

“Salford Roosters now have a club house that is fit for the next 40 years and will become a real asset to the wider community. This opens up so many opportunities for new players, volunteers and local people.”

Jon Dutton, Chief Executive Officer at RLWC2021, added: “To see the fantastic project at Salford City Roosters completed is another ‘bricks and mortar’ example of how this tournament is committed to delivering widespread positive social impact across England.

“We know that projects like the clubhouse in Moat Hall Avenue will become an essential part of their respective communities for years to come, offering future generations of the rugby league family a place to develop, while also being a place local people can visit and be proud of.

“One positive factor from postponing the tournament is that we will see many more projects like this completed and become a hub for celebration during our trailblazing tournament next autumn.”

The new clubhouse which is council owned and leased to the club, includes changing rooms built and fitted to Sport England standards, an entrance ramp to make the building accessible to everyone, new rooms, bar, kitchen, car parking and fencing around the pitches.