You are here: Home / Your council / News / Salford firsts celebrated with stunning sculpture

The city that had England’s first public library, first public park, and first horse drawn bus service – amongst many other firsts - has celebrated them with a stunning new sculpture.

A cast bronze horse and lamppost decorated with symbols of Salford’s pioneering history and famous sons and daughters was unveiled today in Bexley Square, off Chapel Street (Wednesday September 8) by proud Salfordian and musician Peter Hook and the Ceremonial Mayor of Salford Councillor John Mullen. 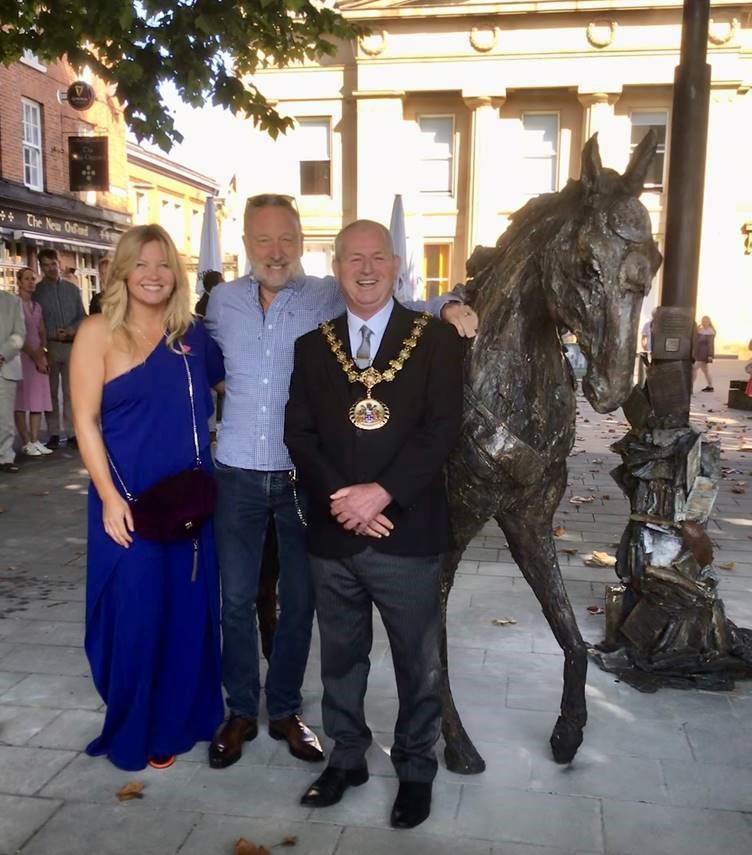 Funding for the sculpture by world-renowned artist Emma Rodgers, famous for her Cilla Black statue in Liverpool, came from developers X1 who transformed nearby former Salford Town Hall into apartments.

Salford was the first city to have horse drawn buses which ran along Chapel Street and horses also worked underground in coal mines and along the canal system.

The horse’s veins mirror the Bridgewater Canal which began in Worsley in 1761, and was a pivotal part of the Industrial Revolution. Train tracks run along the bridle symbolising the first public railway through Eccles and across Chat Moss in 1830 and books run through the mane as England’s first free public library opened in Salford in 1850.

Each book represents a piece of Salford’s history and remembers famous sons and daughters such as Emmeline Pankhurst and scientist James Prescott Joules who lived locally. A poppy has been added to honour the Salford Pals who died in World War One and there is a tribute to Vimto as the first factory was in Chapel Street.

“I wanted to bring together and celebrate these firsts in one piece, offering an opportunity to discover, explore and reflect on Salford’s fascinating and inspiring stories,” said Emma.

“The name Salford derives from an Old English word meaning willows by the ford and this is symbolised by the entwined trees at the top of the lamp post, as well as signifying that Chapel Street was the first street in England to be lit by gas in 1805.”

Emma also added a dog cocking its leg against the lamp-post in tribute to Salford artist Harold Riley and his famous sketches of dogs.

“We wanted to capture and celebrate that rich history of Salford firsts – many of which happened in Chapel Street and add another exciting element to the bars, restaurants, businesses and homes which are breathing new life into the area.”

Mr Hook said: “I have Salford Rules painted on my stage equipment and that, along with my name and one of my guitars is included on the statue. I’m very flattered and honoured to be there alongside Salford greats like LS Lowry and Albert Finney. I’m a proud Salford boy and it’s wonderful to celebrate what Salford has done.”