You are here: Home / Your council / News / Twin paintings for twin towns

A former history teacher and school inspector has paid tribute to more than 50 years of friendship between Salford and Lünen, Germany by turning to art.

Nick Tyldesley, a member of Eccles Quakers which is part of the Salford Churches’ Partnership, created the two paintings during lockdown. One has been sent to Lünen and the other was presented to the Ceremonial Mayor of Salford Councillor Ann-Marie Humphreys on his behalf by the Reverend Doctor Keith Archer. 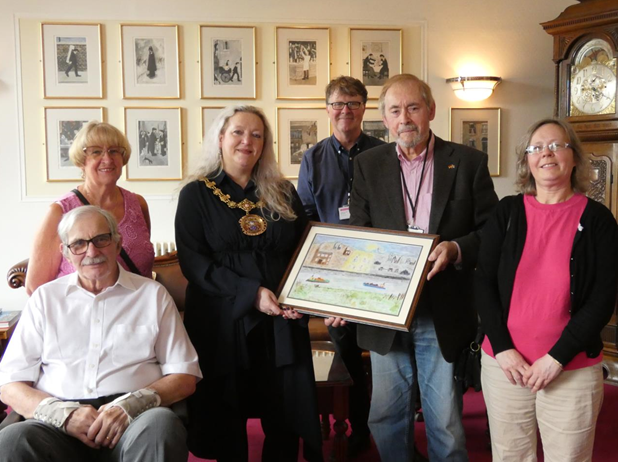 In a letter accompanying the painting Mr Tyldesley, who lives in Bolton, quoted lines from Shakespeare’s Merchant of Venice when Portia reflects on how far a candle throws its light and shines like a good deed in the world.

He said he had painted citizens of Salford and Lünen meeting under a sunbeam in the centre of the photo to capture the idea of peace and friendship between the two cities continuing to shine in a turbulent world.

The painting also shows the industrial heritage, canals and mines that both cities share and matchstick figures which pay tribute to Salford’s famous artist LS Lowry.

Ceremonial Mayor of Salford Councillor Ann-Marie Humphreys said she was delighted to accept the painting on behalf of the city.

“The painting not only reflects the heritage of our two cities but is a piece of history itself. It was created during unprecedented times when we were unable to travel but kept up our friendships and partnerships and never lost sight of the connections between Salford and Lünen,” she said.

Town twinning was born in the aftermath of World War Two in the hope that the connections and friendships created would spare Europe from conflict in the future.

Lunen was twinned with the former borough of Swinton and Pendlebury from 1966, thanks to a wartime friendship between a local resident and a German prisoner of war.

Both men were miners and after the war they promoted a link between the mining unions in the two towns. That was cemented when Jim Birmingham, a miners' union official, became Mayor of Swinton and Pendlebury in 1966.