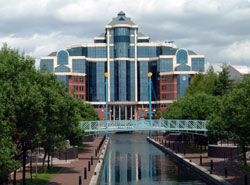 The redevelopment of Salford Quays has created a world-class business, cultural and residential area. More people now work at the Quays than in its heyday as a major seaport. Salford Quays has also become a popular residential area with a regular tram service to West Salford, Altrincham and Manchester city centre. The development of MediaCityUK will continue to build on the area's vibrant economy, fantastic leisure assets and high quality residential buildings.

Key milestones have included the opening of The Lowry in 2000, with its theatres, galleries, shops, bars, restaurant and conference facilities, along with the Digital World Centre and the Lowry Outlet Mall and leisure development.

The Quays has established itself as a tourist destination of choice with a wealth of world-class entertainment, sporting, leisure and cultural facilities.

MediaCityUK was designed to provide a purpose-built home for creative and digital businesses.

Centred around a waterfront public realm area twice the size of London's Trafalgar Square, MediaCityUK is a destination in its own right, complete with bars, cafés and restaurants. The development's piazza is designed to accommodate up to 5,000 people, making it a natural focal point both day and night.

Find out how to get to MediaCityUK.

A wide range of BBC broadcasts now come regularly from MediaCity including Blue Peter, Newsround, Mastermind, A Question of Sport, Match of the Day and Football Focus.

You can book a place on the BBC North tour, where you’ll walk in the footsteps of your favourite stars. You will also have the chance to take part in your own television production in our interactive studio.

Younger viewers (age 6 to 11) can take part in the special CBBC tour and have a go at being a CBBC presenter or find out how it feels to present the news and weather.

Coronation Street is now at filmed at MediaCity from a state-of-the-art production centre next to the Imperial War Museum North.

The University of Salford has a presence at MediaCityUK, with a brand new campus for more than 1,500 students and staff. Specialist courses, designed in conjunction with the BBC, equip students with the skills to help them access job opportunities on site.

The £70 million Soapworks development at Ordsall Riverside is already transforming the former Colgate Palmolive soap factory into a modern and dynamic centre for business, creativity and leisure.

Complementary to the MediaCityUK offer, the project is targeted at the digital and media sector and new business start-ups.

It is estimated that future re-development phases could deliver a further 1,200 jobs.

Consultation with the Ordsall Community Forum informed the development of detailed design work and a full planning application was determined and approved by Salford City Council on 5 September 2013.

Located in the south tower of the MediaCityUK studio block, HOST is a place where creativity and innovation can be nurtured and developed. It offers a range of services to help stimulate and support the growth of media companies and has been built around six defining themes:

Salford City Council secured £3,775,321 funding to progress the project from the North West Regional Development Agency (NWDA) and a further £6,852,678 under the European Regional Development Fund (ERDF) which is managed in the northwest by the Department for Communities and Local Government.