Condolences on the death of HRH the Duke of Edinburgh

Get the latest coronavirus advice for our parks and green spaces 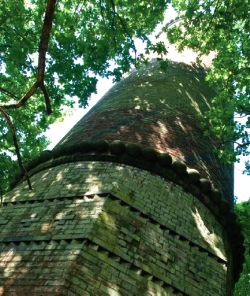 At Clifton Country Park are the industrial remains of Wet Earth Colliery. Established around 1740, the colliery was one of the first deep mines to be sunk in the Irwell Valley.

Wet Earth Colliery is of importance for three main reasons. It was the first deep mine to be sunk in the valley, and had the first application of steam winding in the area. Secondly, compared to most other pits, it had a very long working life: from around 1750 through to 1928 - almost 180 years. Finally, it's association with James Brindley and his ingenious hydraulic pumping scheme for the colliery, which was in continuous use from 1756 to 1924, just before the colliery closed.

Engine shed
This shed was built in 1896, originally to hold just one locomotive which ran on the colliery railway line. It was later enlarged to hold two. The ditch in the centre was to enable repairs to be carried out.

Penstock arch
This is where James Brindley got water from the River Irwell to flow underground to his giant water wheel. Nearly 40 years after it was built, Matthew Fletcher decided to widen the stream, so that boats could travel under the arch to go underground to where the mineshafts came up. Coal could then be put straight on the boats so that it didn't have to be carried.

Gal pit
This large circular brick structure used to have a wooden frame around which a horse walked to pull ropes up from the pit. For many years the Gal pit was used for extracting coal, as an access for mine workers and for pumping out flood water.

Wheel chamber
The wheel chamber was built in the 1750s by James Brindley to help solve the problem of flooding in the mines. A large water wheel, powered by water brought in from the River Irwell was used to power bucket pumps, to bring flood water out of the mine. This water flowed back to the River Irwell along a tunnel called the tailrace.

Cottage
The cottage which stood here was built at the turn of the 18th Century and survived until World War II. The original stone building may have consisted of only one room but this was later extended between 1860 and 1880. The brick outhouse that you can see was probably the kitchen, wash-house and larder.

Fletcher's folly
With the sinking of a new shaft in 1804, Ellis Fletcher decided to use a steam winding engine (rather than horse power) to heave coal out of the mines. Fletcher's folly was built in 1805 to allow steam from the furnace to escape.

Fan house
The Fan house was built in 1889 by the Walker Brothers of Wigan to ventilate the colliery (which was previously done by a furnace). Fan blades, powered by a steam engine rotated to pull air out of the nearby upcast shaft from the workings below.