A brand new way of playing cricket has come to Salford.

Salford is proud to be the first place in the world to give a permanent home to Cage Cricket, a fast-paced version of the traditional game, specially designed for urban spaces.

Salford has a history of being a city of firsts, including the first library and public park - now we can add Cage Cricket to the list.

A purpose-built cage has been built in Ordsall Park which officially opened at the Ordsall Festival on Saturday 27 July 2013. 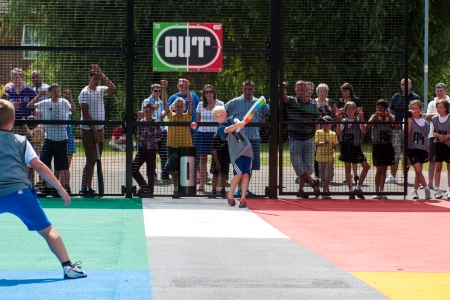 Backed by cricketing legends Sir Ian Botham and Shane Warne, Cage Cricket has been developed to get more people playing cricket and to overcome barriers such as lack of time, space, money and the sport's old-school elitist image.

The 'cage' is a walled or fenced-off concrete area which is the size of a basketball court.

The rules are simple. Six people play at once, taking it in turns to bat, bowl and field across four zones. Players compete as individuals but have to work together to win by hitting the ball on the sides of the cage. There is also no external umpire - this means that fielders rotate around the 'red zone' where they take on the responsibility of calling decisions.

The game allows people of all ages to get involved, regardless of where they live or their background. Players are also encouraged to design their own bats and logos, engaging the kind of creativity seen in skateboarding and BMX.

The scheme funded through Section 106 funding has been a working partnership between Salford City Council, Cage Cricket and Lancashire Cricket Board. A joint bid for 'sportivate' funding has also been submitted to provide Cage Cricket coaching sessions at Ordsall Park.

The Cage Cricket facility is part of a new sports zone at the park - which includes a new multi-use games area with basketball and football, and outdoor gym and fitness equipment.