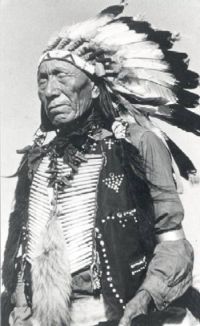 Strange though it may seem today, hundreds of Oglala Sioux Indians - depicted in the 1990 film 'Dances with Wolves' - once settled, for six months, in their teepees on the cold and damp banks of the Irwell during the winter of 1887-88!

The campers (who have links to a modern-day Native American reservation in South Dakota, USA) were all members of Buffalo Bill's Wild West Circus, where they recreated classic gunslinging scenes from the wild west with their ‘cowboy' counterparts. The show was so popular in Salford that it took a break from its world tour to stay longer in the city.

Councillor Stephen Coen has investigated the story and many other enigmas surrounding the Sioux Indian's six month stay in Salford. Other interesting facts Councillor Coen has unearthed include the fact that many of the Sioux were veterans of the iconic American battle Little Big Horn... and they were on the run in Europe from the US cavalry!

One small Sioux girl was baptised at St Clement's Church before slipping out of the history books, and descendants of the Salford settlers still live in Greater Manchester.

Spiritual leader of the Lakota Sioux Indian tribe. Wrote of his stay in Salford in his book ‘Black Elk Speaks’, following an extensive interview with researcher and historian John Neihardt, in 1931. He was ‘left behind’ with a handful of others from the Lakota tribe in 1887, when they missed their departure train, after the rest of their tribe decamped and left the area. They then had to make their own way back to South Dakota. Fought at the Battle of Little Big Horn, and boasted the first name Nicholas.

Surrounded was a 6ft 7in warrior. He died of a lung infection aged only 22 during the tribe’s stay in Salford. He was the only member of the tribe to die while they were here, and his official records can still be traced today. After he died in his teepee on Salford Quays, his body was taken to Hope Hospital. According to Brompton Cemetery (London) records, he was buried on 15 December 1887 next to his fellow Lakota warrior, Paul Eagle Star.

The only Sioux to be born in Salford during their stay, she was baptised in February 1888 in Sacred Trinity Church, where registers record her as being daughter of Little Chief and Good Robe.

One of the first Pony Express riders in America, Charging Thunder was a member of the Blackfoot tribe. He came to Salford aged 26 during the show’s 1903 tour, and stayed on. He was believed to have been the only native American living in the Northwest until his death aged 52 in 1929. With him were Josephine, a sharp-shooting cowgirl with the circus, and their daughter Bessie. The family stayed in the area after Bessie caught diphtheria. He changed his name to George Edward Williams and moved to Thomas Street in Gorton, Manchester.

Mike is part of the modern-day South Dakota Lakota community, and is Rita’s first cousin.