Latest information about the coronavirus

Get the latest coronavirus advice for our parks and green spaces 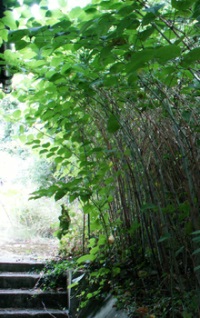 Stem growth is renewed each year from the stout, deeply-penetrating rhizomes (creeping underground stems). It is widespread around Salford appearing on waste ground, along watercourses and areas of previous tipping.

It is classed as an invasive species of plant, and is considered a particular problem as it can block footpaths and damage concrete, tarmac, flood defences and the stability of river banks.

Japanese Knotweed does not spread from seeds in the UK. It is spread when small pieces of the plant or rhizomes (underground root-like stems) are broken off. One piece of rhizome or plant the size of a fingernail can produce a new plant.

Pieces of plant or rhizome can be transported to a new location by:

Individual plants can cover several square metres of land, joined up below ground by an extensive rhizome network.

What should you do

On your property, you should aim to control this plant and, to prevent it becoming a problem in your neighbourhood.

On no account should Japanese Knotweed be included with normal household waste or put out in green waste collection schemes.

On neighbouring land where problems with Japanese Knotweed occur, we suggest that you speak or correspond directly with the land owner.

If invasive plants such as Japanese Knotweed spread onto a neighbour’s property, this may be considered to be a private nuisance and the landowner would have the power to bring a civil action against the land owner on this basis.

Government Guidance, given on their www.gov.uk states that “You don’t have to remove a Invasive  species from your land, but you could be prosecuted or given a community protection notice (CPN) for causing a nuisance if you allow it to spread onto anyone else’s property.” issued guidance

In Salford the local authority have the power to serve a CPN, however before doing so they must be satisfied that the conduct is having a detrimental effect, of a persistent or continuing nature, on the quality of life of those in the locality and the conduct is unreasonable.

The scope of measures in relation to invasive non-native species is limited by a test of whether the species is likely to have a significant adverse impact, if uncontrolled, on biodiversity; other environmental interests; or social or economic interests.

Salford City Council will, when responding to complaints of invasive non-native plants do so in a proportionate manner, taking into account its Enforcement and Prosecution Policy. All complaints will be investigated on a case by case basis.  Enforcement action will not be considered unless the plants are deemed to be in such a state or proximity to be harmful to health or there is a threat of structural damage or invasion of buildings.