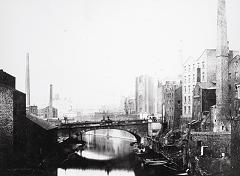 Contaminated land is land that contains substances either on the surface or within the ground that present a risk of significant harm to human health or to our wider environment, including water resources, the local ecosystem and structures.

UK soils often contain low levels of substances, however they may not pose a risk to human health or the environment, either because they are inaccessible, not mobile or the level of exposure is not sufficient to cause harm or pollution.

Historically, Salford has long been associated with many types of activity that potentially caused contamination of land and water.

Located on the River Irwell, with coal supplies available close by, the industrial revolution had a major impact on Salford, with a massive expansion in the numbers of mills, factories and industries and a resultant rise in population. The need to house the expanding workforce led to the construction of vast areas of poor quality housing during the Victorian period.

Salford became one of the greatest cotton towns, while brewing too played a significant part in the local economy. In 1894, the Manchester Ship Canal was built and, together with the docks in Salford, the existing Bridgewater Canal and extensive railway network heralded a lengthy period of economic and physical growth. Other common industries were steel working, docks, bleach and dye manufacture, engineering works, tar refining and foundry works.

In the past, many of these industrial activities were carried out with little regard for their impact on the environment, particularly prior to the Control of Pollution Act 1974.

Since the mid-1960s, changes in national and international economies and the introduction of new technologies had an adverse effect on these traditional heavy industries. Many firms closed leaving behind derelict factories, mills and yards which have yet to be re-developed.

In addition, there are numerous refuse tips across Salford that accepted domestic, industrial and incinerator wastes. In the early days, licensing was not required, and these tips were not engineered or as carefully controlled as the modern licensed landfill sites of today.

Salford City Council is committed to its key mission statement at the centre of the council's strategic plan, namely: "to create the best possible quality of life for the people of Salford". Clean, safe and healthy local environments are seen as key factors for the regeneration of Salford, and targets were set for the reclamation of derelict and brownfield sites and for the identification of contaminated land, to make progress towards these aims.