‘A central neighbourhood offering an alternative urban experience. An authentic place that feeds the mind, body and soul’

A new Development Framework was adopted by Salford City Council on 23 May 2022 aimed at defining the vision and strategy for Chapel Wharf through to 2042.

The adopted framework establishes a planning framework and clear direction regarding what can be delivered in the Chapel Wharf area to ensure it becomes a successful and vibrant new city district.

The development framework sets out a vision and spatial strategy that aims to create a new '15-minute neighbourhood' at the heart of City Centre Salford, which will be an area open to all, as a place to call home, make a living or visit and relax in.

This will be achieved through improving connectivity in to and through the area for both walking, cycling and active travel and through the creation of high-quality public spaces and sites for new commercial, community and residential developments.

Furthermore, the cultural, architectural, transport, heritage and ecological assets of the area will be protected, enhanced and celebrated and key infrastructure barriers overcome. 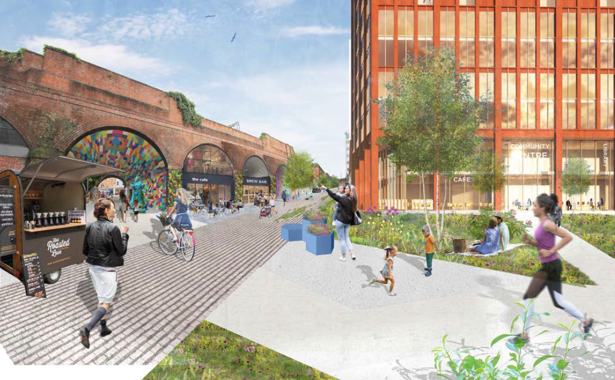 Where is Chapel Wharf located within the city?

Chapel Wharf is located in City Centre Salford between Central Salford and Greengate and is bound by Trinity Way to the north and the River Irwell to the south. 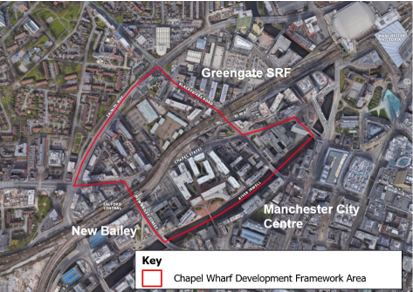 Why was the development framework needed?

Prior to the preparation of the development framework there was a lack of a cohesive vision for the Chapel Wharf area. This was in a large part was due to the area not previously being covered by a formal framework.

This was unlike the adjoining areas of Greengate and Central Salford that were being shaped by adopted frameworks and strategies.

As the neighbouring areas grew and thrived, development interest in the Chapel Wharf area began to increase.  However, this was being brought forward in an un-coordinated manner by different developers and landowners.

Therefore, the city council identified Chapel Wharf as a Regeneration priority and the need for a Development Framework was recognised. The aim of the Development Framework being to guide development and infrastructure interventions, ensuring that the area becomes a successful and vibrant community, playing its role in the ongoing transformation of City Centre Salford.

The Chapel Wharf Development Framework should be read alongside the adopted development plan for the city of Salford and other planning guidance. In the light of the level of consultation that took place as part of the preparation of the framework, it will be a material consideration in the determination of planning applications in the area. It will also guide future investment decisions by key agencies and developers.

Remember you can contact us quicker, easier, better online.