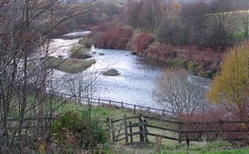 Landscape is about the relationship between people and place and is influenced by both natural and cultural elements. For example geology, climate, soils, plants, animals, past and present land use, and building materials all have an impact on the character of a landscape.

In February 2006, the UK government signed the European Landscape Convention. This means that the government now officially recognises that landscape is an essential component of people's surroundings, and part of their identity. This recognition requires integration of landscape into planning, environmental, social and economic policies and a commitment to the establishment of policies aimed at the protection, management and planning of landscapes.

In 1996, the former Countryside Commission and English Nature with support from English Heritage produced "The Character of England" map, which covered the whole country. This was accompanied by descriptions of 159 landscape character areas, together with identification of the influences and main pressures for change upon those areas. Salford was identified as being covered by four national landscape character areas - Manchester Pennine fringe, Manchester conurbation, Mersey Valley and Lancashire coal measures.

More information on the national landscape character areas can be found on the Natural England website.