Soldiers, sailors and airmen and women will be given better support when they return to 'civvy street' in Salford, thanks to a new official agreement. 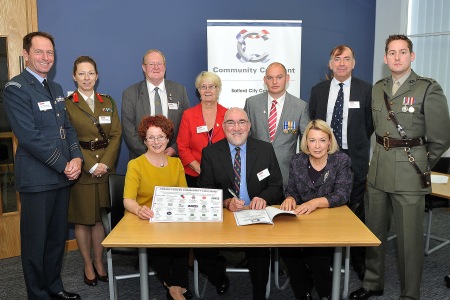 The Salford Armed Forces Community Covenant, signed on Wednesday 2 October 2013 commits Salford City Council and the local armed forces community to work together to support returning veterans, as well as serving members and their families.

Salford is the first city in Greater Manchester to sign up to an Armed Forces Community Covenant.

It means that the council would offer help and support to the armed forces community, addressing issues such as housing and welfare - in a concerted effort to help them adjust back into civilian life.

This will involve establishing a ‘one stop shop', where veterans, serving members, and their families, can access help on a range of issues.

As part of the new approach, City Mayor Ian Stewart has committed to building a new arboretum in Salford to etch the names of those Salford residents who made the ultimate sacrifice in conflicts other than World War Two.

Two councillors have been chosen as the council's Veterans' Champions - Councillors Margaret Morris and Barry Warner, both former members of the armed forces, will work to ensure that the voice of veterans is heard across the council.

It also means that the council would assist armed forces members in accessing further help and support from the Ministry of Defence and organisations in the charitable and voluntary sector, such as the Royal British Legion.

Salford City Mayor Ian Stewart said: "I am delighted to sign the community covenant today, to set in stone a new, co-operative relationship between the council and the local men and women from the armed forces.

"Veterans, serving soldiers and their families deserve both our respect and the right kind of help and support to ease the pressures of civilian life.

"Initiatives such as the one stop shop and the introduction of Armed Forces Champions will hopefully help make a real difference to their lives.

"Through the council's expertise and experience in fields such as welfare, the one stop shop will offer the right help and advice under one roof and provide guidance on help from our partners."

Councillor Warner, who served in Kenya in the early 1960s, said: "As an ex-serviceman, I am pleased to back the City Mayor's plans to help former and current servicemen and women.

"When they return from duty, they have to find somewhere to live, find a job, and readjust - it can be very difficult. We must do something about it, and that's what this community covenant is doing."

Wing Commander Gavin Hellard said: "Salford has a great history of service to the nation through the armed forces.

"It is critical to have the link from the armed forces to the community. It's about making a tangible difference. The covenant helps us to do that."

"This new covenant will help to bring the military and civilian communities together as one for many years."