In October 2013, Salford City Council with members of the armed forces, together with a number of partners signed the Armed Forces Community Covenant. 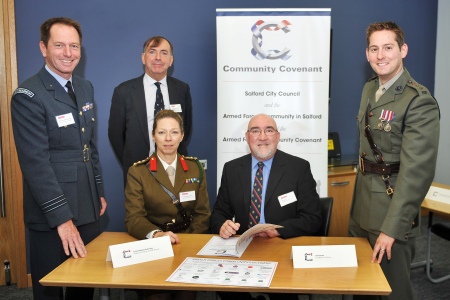 Representatives from 15 organisations and Salford's three local MPs, Hazel Blears, Barbara Keeley and Graham Stringer respectively who added their support to the principles of the covenant:

The Salford City Council Armed Forces Community Covenant is a voluntary statement of mutual support between a civilian community and its local armed forces community.

The purpose of the community covenant is to encourage support for the armed forces and their families working and residing in Salford and to recognise the sacrifices made by all members of the armed forces community.

Councillors Morris and Warner have been appointed as the council's Veterans Champions, both former members of the armed forces who are working to ensure that the voices of veterans and their families are heard.