Peel Park was the first public park in the United Kingdom funded entirely by the people’s subscription, to officially open. Created in 1846, it was free to use and brought all Salford residents together. 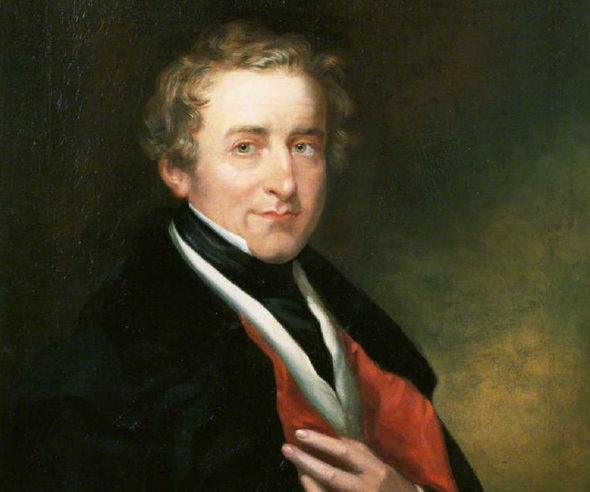 The Park is named after former Prime Minister Sir Robert Peel, elected from 1834 to 1835 and 1841 to 1846. He’s famed for modernising the country’s social and economic policies. He particularly made a huge impact on the people of Salford through his reforms, which limited the hours that women and children could work in factories. As well as founding the police force, and repealing the Corn Laws – ensuring cheap bread for the population.

See the timeline of Peel Park 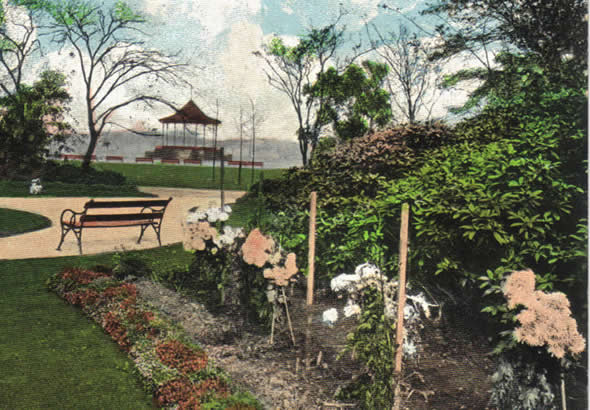 The first Head Gardener was Thomas Gibbons. Thanks to a descendant we have his full life story, right up to a noble but tragic end.

The second Head Gardener was Robert Petrie. Appointed in 1852 he died unexpectedly in 1874 and was replaced by Henry Moore. The work of Henry Moore at Peel Park and other Salford parks is recorded in journals which are held by Salford Museum and Art Gallery. Read the head gardener’s own words below.

In 1874, Henry Moore took over as Peel Park’s Head Gardener- In the Salford Art Museum and Gallery you’ll find the entirety of his original fortnightly journals, recording the details of which plants flourished in certain times of the year, as well as the life and actions of the 15 workers in the park. Below are some examples of his journal entries from 1875.

11-23 Jan: Installing French drains. Mr Danvers left. Want a leading man to act as foreman and check those in the habit of leaving their work during my absence to visit the beer houses.

3-29 May: Tulips and Hyacinths out of beds. Steps at east too spongy for asphalt, stone flags. Walk is gravelled, circle has fine gravel. Jas Burton tried to steal the pea- cock, found up the large Pear tree; first offence, good character, acquitted. 31.

18 Oct-3 Nov: Taking up bedding and Dahlias; planning Tulips and Hyacinths on the Promenade, round the Peel and Brotherton statues and other beds. Removing old Ponticum Rhododendrons and replacing with new named varieties, for better show. 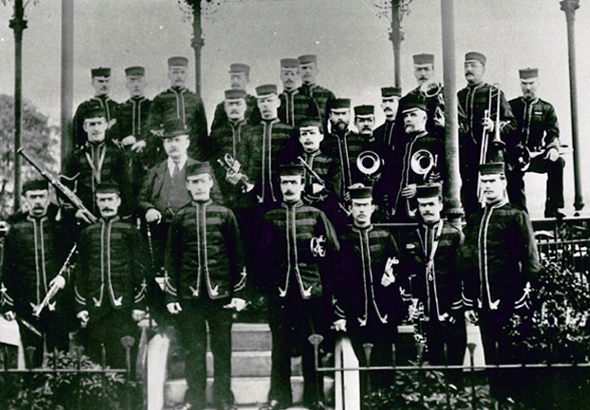 Something kinder that filled the air during the Victorian times were the musical notes that came from the brass bands that were so popular at the time. Read more about the popularity of brass bands.

In the 1950’s and 1960’s however, the bands fell out of fashion as people thought it easier to listen to recorded music at home. As a result Peel Parks bandstand went unused, fell into disrepair, and was thus removed. Today, the park is once more being used for concerts and music, with Peel Park currently under considerable development, we plan for this to continue. 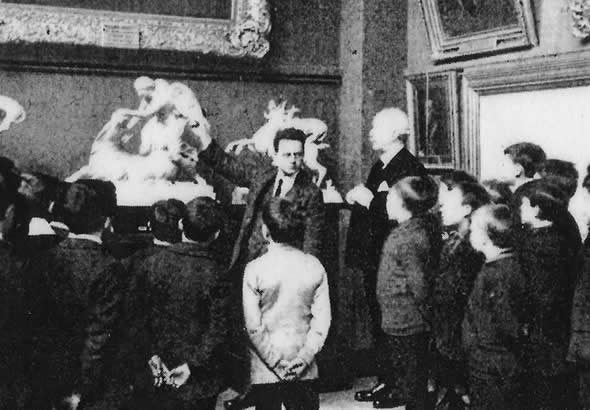 This park belongs to you, developments have been funded by public money and volunteers have worked relentlessly to help transform the park.

Read more about the people's park 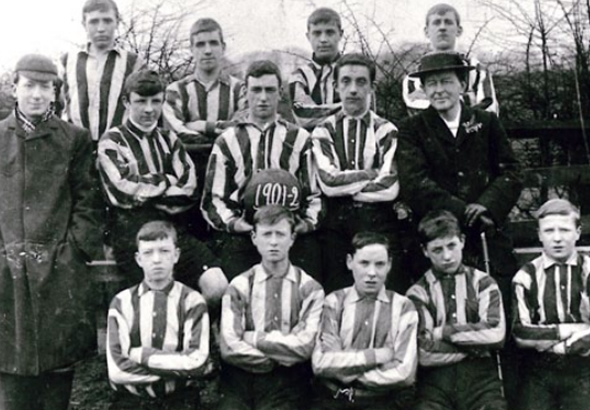 Despite reforms made by Sir Robert Peel, due to the mass of the Industrial Revolution, streets during the Victorian era were cramped and polluting.

Salford grew rapidly in the early nineteenth century. Houses were tightly packed into streets close to the factories where the people worked, and the residents of Salford much like the rest of the country, lived with the effects of increasingly polluted air and water. As a result their health suffered.

Parks became the first line of defence to improve physical health, wellbeing and strength. The design for Peel Park incorporated space for activities such as quoits and had designated outdoor gymnasiums. Such spaces were strictly segregated into men’s and women’s areas.

In time a bowling green and pavilion were added but there was a charge for this activity. The Park Keeper record book shows that in hard winters there would be ice skating when the lake froze. The resourceful gardeners also charged for that.

Rowing was also introduced on the river but it was not an ideal site due to the variations in the river’s depth and flow and this activity moved to Agecroft.

Organised sport became a popular way to combat the ill health that came with Victorian life, and late Victorian Britain is where sport began to develop a professional edge. Manchester and Salford became major sporting centres. Both the Football and Rugby league (The Northern Union) trace their early starts in the city. More so, the Broughton Rangers played matches where the River View is today, and won the Challenge Cup in 1902 and 1911. The David Lewis playing field were created at the north end of Peel Park (now part of the University).

All in all sport was an essential component of Peel Park from day one. The old bowling greens are an ideal area for a kick-about or children’s fun races. The park and riverside walks are ideal for walking and running. For the more adventurous the Salford Trail passes through and links the park to a 50 mile trail around Salford’s green spaces.

A home to learning 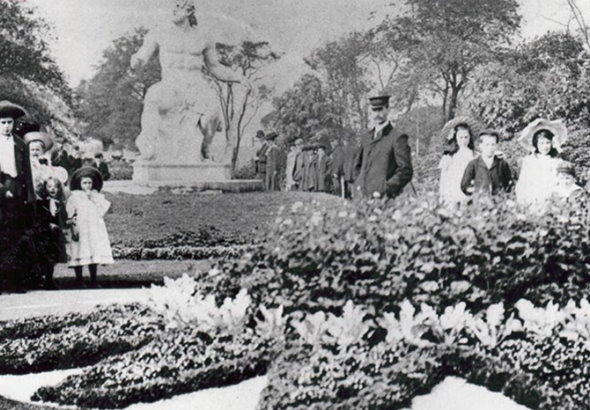 The Victorians were strong believers in self-improvement and Peel Park gave the opportunity to do just that.

The Victorians were strong believers in self-improvement and Peel Park gave the opportunity to do just that. In 1850 Lark Hill Mansion at the heart of the new park became the Royal Museum and Library, the first unconditionally free public lending library, featuring reading rooms and an art gallery.

The first curator, John Plant was a man of many interests including branches of the arts and sciences. The Victorian idea of self improvement through learning was at it’s height in 1896 when the Royal Technical Institute was opened at Peel Park, a merger of two existing men’s institutes. It was housed in a purpose built college (now the Peel Building) and offered subjects designed to create a skilled workforce for local industries. The subjects covered included engineering, applied physics, mathematics, chemistry, building, dyeing, spinning and weaving as well as art.

In the twentieth century more buildings and departments were added to the complex and in 1956 it became the College of Advanced Technology. In 1967 the University of Salford was established and gained a Royal Charter. Now the campus of the university is known as Peel Park and its academic and residential building enwrap the park on three sides.

Recent developments of the campus have seen access routes developed and improved to encourage students, visitors and local residents alike to use and enjoy the park as freely as they like.

The park is regularly used as an outdoor classroom, providing opportunities for art and filmmaking, surveying and mapping, technology and wildlife monitoring. Local schools, adult study groups, university departments and individual students are all welcome. 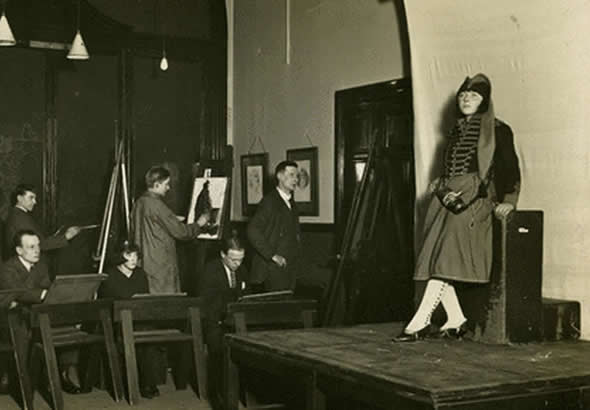 The Park itself has been immortalised through decades of artwork, film and writings.