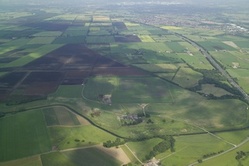 Chat Moss covers approximately 30% of Salford (2,750 hectares). It contains the largest area of grade 1 and 2 farmland and the largest woodland in Greater Manchester.

It is also a source of significant wildlife interest such as a wealth of farmland birds and remnants of lowland bog habitat which is a rare and declining habitat which can only be found on peat.

Much of the landscape of Chat Moss reflects its agricultural past. It was reclaimed in the 19th century by a large-scale network of drainage channels. These are still required today to prevent the land getting waterlogged and they have resulted in a patchwork landscape with fields often separated by ditches rather than hedges or walls.

Chat Moss was once one of the major sources of crop production for Manchester, supplying the salad and vegetable needs of the city. It was an important source of employment and income for local people. However, over time, this farm economy has declined in the face of global markets and the purchasing power of the supermarkets. Today on Chat Moss, you are more likely to see turf growing, arable farming, hobby farming and horse livery than you are traditional moss cropping.

There is a growing interest in the future landscapes of the mosslands and in Salford there is a recognition that many of the activities on the moss are resulting in a fragmented landscape with few tangible benefits to the local economy. The potential of Chat Moss as a major green lung for the city is being recognised. Chat Moss has the potential to be a productive landscape with long term recreational, environmental, economic and health benefits for the city, but this will require partnership working and a proactive approach.

In 2006, the city council, in partnership with Wigan and Warrington councils and a range of other agencies, commissioned a study to identify a long term vision for Chat Moss. The mosslands vision sought to present a balance of agricultural, leisure and biodiversity land uses across Chat Moss. It was acknowledged that securing such a balance of uses would be difficult given the lack of control over the land. The vision summary can be downloaded below. The vision has not been formally adopted, but has been used to inform emerging planning policy.

The vision is being taken forward in a number of ways. In particular, the city council is part of the Great Manchester wetlands partnership, which is working on proposals for a nature improvement area.