Work has started on a Greater Manchester-wide programme to make journeys on foot or by bike much easier and more attractive. The network will be made up of more than 1,800 miles of routes, including 400 miles of Dutch-style segregated bike lanes, and will be the largest joined-up system of walking and cycling routes in the UK.

In support of this ambition, the Mayor of Greater Manchester has allocated £160 million to the Mayor’s Cycling and Walking Challenge Fund. This has been made possible thanks to the national government’s Transforming Cities Fund which is investing in public and sustainable transport to improve productivity and spread prosperity. In the first six rounds of bids, the following schemes in Salford have secured funding and the schemes are now being developed in more detail and in consultation with local communities. More information about each scheme will be published here as it becomes available. For latest information on the schemes, visit online public consultation via Commonplace.

This scheme features a mile of new footway level cycle track, a parallel walking route, six upgraded junctions where cyclists are fully protected from motor traffic and eight bus stop bypasses for bikes. The project, which will also provide increased capacity for motor traffic, is expected to cost in the region of £19.8 million with £4.8 million from the Mayor’s Challenge Fund, £10.5m from the Government's Growth Deal and £4.5m from Salford City Council. 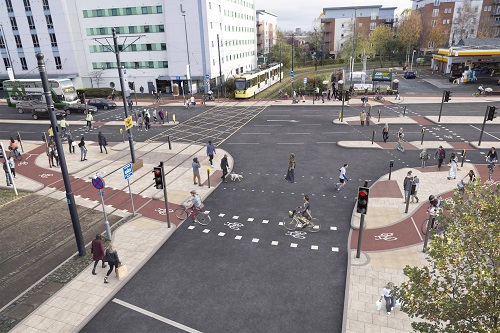 This project will create a new traffic-free route between Salford and Trafford Park. This includes reinstating a historic raised towpath across the Barton aqueduct, two new ramps, towpath widening and surface improvements. Completing a key gap in the Bridgewater Way route, this scheme will link residential communities in Salford with major employment, retail and leisure opportunities in Trafford Park.

The project will cost in the region of £5.3 million with a £4.8 million contribution from the Mayor’s Challenge Fund and £500,000 in local contributions.

The number of lessons has been learned from the existing cycleway scheme running along Great Clowes Street and Blackfriars Road, which was opened in early 2016. Enhancements informed by feedback from regular users and a stage four road safety audit have been proposed on the existing cycling and walking provision along the Broughton Cycleway to improve the quality and safety of facilities along the corridor. The cycleway will also form part of the Bee Network proposed for Salford City Centre Active Neighbourhoods that will ensure continuous, attractive, safe and connected routes to other MCF schemes. The proposed enhancements will include:

The section of Chapel Street between New Bailey Street and Blackfriars is a key link into the city centre, however this route is currently dominated by motor vehicles. The proposed plans will make it easier and safer for people travelling on foot or by bike by providing protected facilities for cyclists and improved crossing provision for pedestrians along this route.

It will also enhance the street scene on Chapel Street by providing high quality cycle facilities, extended and improved footways along with new trees and planting. 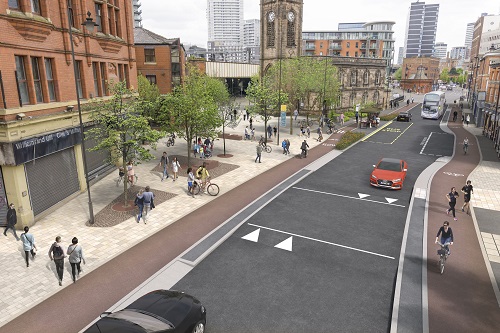 Experience what it could be like to ride the scheme

VR Bike - Chapel Street from Clicks and Links on Vimeo.

A three-week consultation on these proposed changes was held from 21 June to 12 July 2019.

Salford City Council has developed a strategic plan for this part of the city centre aimed at promoting less reliance on the motor car and encouraging more people to cycle, walk or use public transport.

Where is Gore Street?

Gore Street is located at the heart of the city centre, situated between Salford Central Station and Chapel Street. However, at present Gore Street doesn’t connect well with the wider walking and cycling network.

Salford City Council aim to secure funding to facilitate improvements at Gore Street so that it will integrate with adjacent developments and support the opening up of railway arches, creating new pedestrian routes between Chapel Street, Salford Central Station, New Bailey and into Manchester.

The scheme will include new pedestrian crossing facilities and upgraded footways that would connect into improved public realm either side of Gore Street. Junction improvements are also planned that will allow two-way traffic access between Gore Street and Trinity Way. This will improve access and reduce the impact of traffic turning onto New Bailey Street.

The scheme is currently at detailed design stage and the main construction works are planned to start in January 2021 (subject to funding).

Continuing the facilities proposed for Chapel Street East Phase 1, the scheme would support the achievement of a high quality route for pedestrians and cyclists along Chapel Street and adjoining roads between Blackfriars Street and Manchester. This will include improvements to the junction with Blackfriars itself and facilities on Blackfriars Street. As an integral part of this approach, an improved route for pedestrians and cyclists can be created into Greengate.

A short section of the riverside route between the Ordsall Chord and Trinity Way Bridge is in poor condition and needs improving to make it safe for public access. The scheme would improve this length of riverside path connecting with the proposed pocket park and riverside route associated with the New Bailey residential development.

A package of schemes to support the implementation of a strategic plan for walking and cycling in the city centre. The proposals will establish an integrated network of routes through the creation of new walking and cycling routes, public realm, green spaces, new bridges and opening up railway arches for public access. 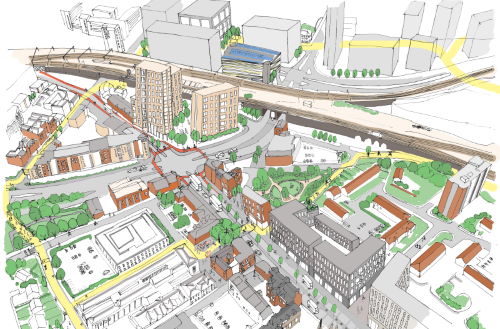 Monton is a thriving local centre with cafes and bars popular with families who visit Monton as part of a day out on the traffic-free cycling network. Several  traffic-free routes converge in Monton, including the Bridgewater Canal, Roe Green Loopline and Swinton Greenway. Salford’s key cycle network review identified that outside the major economic areas, Monton has the highest proportion of trips that are within cycle-able distance. Monton Cycling and Walking MCF scheme will connect the routes to each other and to Monton itself, supporting many more local trips by foot and bike.

The Oldfield Road Corridor plan is an integral part of Middlewood Loop creating improved cycling and walking connections to the University of Salford and the Meadows and Peel Park. The corridor will also provide new cycling connections in to the Liverpool Street/Middlewood Street cycle corridor (NCN route 55) as the existing signal-controlled junction of Liverpool Street and Oldfield Road will be enhanced with pedestrian and cycle crossings on all arms.

A short section of the plan has already been delivered at Carpino Place which has included improved footways for pedestrians, a segregated section of cycleway, green infrastructure and sustainable urban drainage. The MCF scheme would implement the remainder of the Oldfield Road Corridor scheme extending between the A6 Chapel Street and the A57 Regend Road radial routes.

A short section of the riverside route between the Ordsall Chord and Trinity Way Bridge is in poor condition and needs improving to make it safe for public access. The scheme would improve this length of riverside path connecting with the proposed pocket park and riverside route associated with the New Bailey residential development.

The creation of an active neighbourhood in Ordsall where the movement of people is prioritised over the movement of motor traffic, this project will reduce car dependency and rat-running, as well as improving the experience of travelling to public transport hubs. It will deliver ten junction upgrades, six new parallel crossings and 0.6 miles of light segregated cycle lanes, connecting the city centre with Ordsall riverside and Salford Quays.

The project will cost in the region of £2.8 million with a £2.6 million contribution from the Mayor’s Challenge Fund and £200,000 in local contributions. 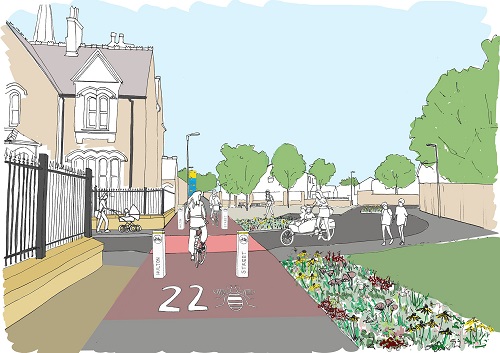 The RHS is opening its fifth national garden in Salford in 2020.

Over time the garden is expected to become one of the largest visitor attractions in Greater Manchester and Salford City Council, the RHS, Peel L&P and the Marriott Worsley Park Hotel and Country Club are keen to ensure that as many visitors as possible can arrive by sustainable modes of transport.

Proposals have been developed to improve walking and cycling routes between Walkden train station and Worsley/Boothstown via the new RHS Garden Bridgewater, extending Salford’s existing award-winning traffic-free network. In total the RHS Bridgewater Walking and Cycling Links scheme will provide a 6.3km shared route, including:

The scheme aims to promote sustainable travel and help to create healthier and more attractive neighbourhoods. Salford City Council, the RHS, Peel L&P and the Marriott Worsley Park Hotel and Country Club are working with Transport for Greater Manchester to ensure all residents are kept up to date with plans for the proposed RHS Bridgewater Walking and Cycling Links scheme. 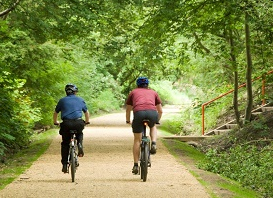 RHS Links consultation:
A three-week consultation on the proposed changes was held from Monday 13 January to Friday 24 January 2020.

The Salford Innovation Triangle contains three of Salford’s largest employers, The University of Salford, Salford Royal Hospital and MediaCityUK, providing over 50,000 jobs in total.  The proposals will provide high quality cycling and walking connections including segregated facilities and the introduction of streets for all concepts from local centres to destinations within the Salford Innovation Triangle. Design options will be explored to remove the severance caused by major roads and a lack of existing cycling and walking infrastructure.

SBNI – Junction Enhancement at A6 Broad Street / B6186 Frederick Road

Similarly, this project will enable additional major enhancements, to a value of £600,000 for people travelling by bike or on foot at a major junction along the A6 that was already due to be upgraded as part of the Local Growth Deal Salford Bolton Network Improvement Programme.

SBNI – Junctions in Swinton and Walkden

This project will provide an additional £1.1 million enhancement from the Mayor’s Challenge Fund, to existing proposed improvements as part of the Local Growth Deal Salford Bolton Improvement Programme at two key junctions.

A new pedestrian and cycle bridge between St John’s and New Bailey which will support improved access between the city centre and the cluster of development taking place on either side of the River Irwell comprising St. John’s, New Bailey and Middlewood Locks. 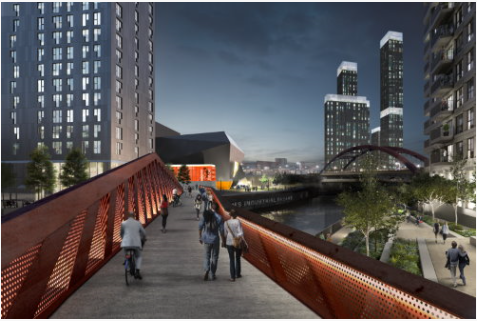 Salford City Council is working with Transport for Greater Manchester to enhance the walking and cycling routes between Monton and Swinton, extending Salford’s award-winning traffic-free network.

The Swinton Greenway proposals include the route between Manchester Road and Monton Road, with several additional links to local schools, colleges and the wider community. The majority of the off-road path will be three to four metres wide, with lighting controlled by timers and/or movement sensors. On-road improvements for pedestrians and cyclists are also proposed, including localised resurfacing and improved crossings. 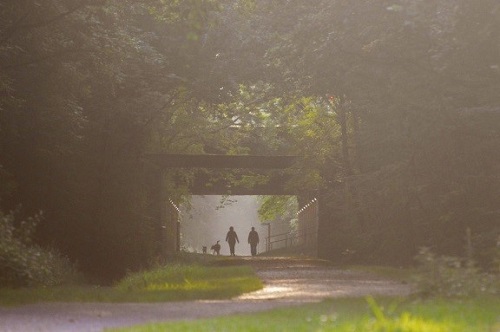 Typical image of an off-road pedestrian and cycle route

Plans showing more details of the highway proposals are available below for the following roads:

The junction is located on Trinity Way and currently has no pedestrian or cycling crossing facilities. There is an established population in the Irwell Riverside area that use the route already and this is likely to increase following construction of further residential accommodation as part of the regeneration master plan framework. The aim of this scheme is to make it safer and easier for people walking or on bikes to cross the busy Trinity Way corridor, providing a continuous route to create a complete bee network.

This junction improvement will feature CYCLOPS design technique, which is the creation of traffic signal-controlled junction that protects cyclists by providing an orbital cycle route that will separate cyclist from general traffic in space and time. The proposed works will provide pedestrian and cycle crossing facilities at the junction of Trinity Way and Springfield Lane in order to:

Information showing more details of the proposals are available below: 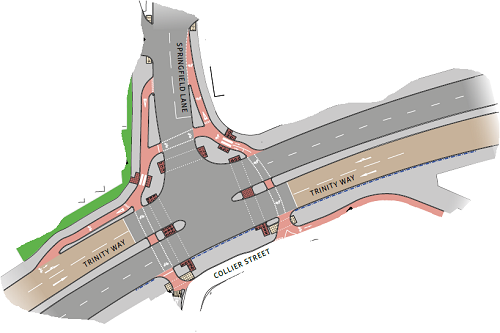