You are here: Home / Parking, roads and travel / Cycling and walking / Walking and Cycling Links to RHS Garden Bridgewater 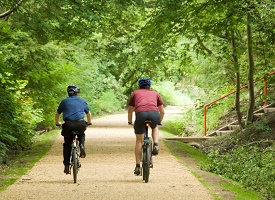 RHS Greenway is a scheme to improve walking and cycling links to RHS Garden Bridgewater in Worsley and to other local facilities, including Walkden train station, Parr Fold Park and Boothstown Marina. This plan to improve sustainable travel in Salford received overwhelming endorsement at a public consultation in early 2020.

Funded jointly by the Mayor’s Cycling and Walking Challenge Fund, Growth Deal and Salford City Council, the scheme when complete will connect residents of Boothstown, Walkden and Worsley with RHS Garden Bridgewater. It will provide 6.2km of new or upgraded walking and cycling routes, 4.6km of which will be traffic free with a link along the Bridgewater Canal.

Several phases of the route are now complete, these include:

Work will soon be underway to complete the final phases which include:

There is a Green Travel offer available for visitors to RHS Garden Bridgewater travelling by bike or on foot. Please see below for details about how to get to the garden using the RHS Greenway from different directions.

Directions to access the route along the north of the Bridgewater Canal between Worsley and Boothstown are as follows:

For those travelling along the Bridgewater Way towpath from Wigan and Leigh:

For those travelling along the Bridgewater Way from Manchester, Trafford, Eccles and Monton:

For those travelling along Port Salford Greenway:

When complete, the £3.2 million scheme will become part of the Bee Network, a proposal for the UK’s largest cycling and walking network, connecting communities in all ten Greater Manchester authorities, benefiting 2.7 million people and making cycling and walking a real alternative to the car.

Alongside connecting residents to RHS Garden Bridgewater, the scheme will also link them to local facilities and improve pedestrian and cycle safety. It will also create connections into the region’s wider walking and cycling network, helping to encourage active and healthier lifestyles.

The scheme has been developed in partnership with Salford City Council, Transport for Greater Manchester (TfGM), the Royal Horticultural Society (RHS), Peel L&P, the Worsley Park Marriott Hotel and Country Club and Asa Homes. It will be delivered by one of Salford City Council’s framework contractors, Landscape Engineering, who started on 25 January and are due to complete by March 2022. Visit the RHS Walking and Cycling Links page on the Commonplace website for more details about the construction programme including key dates.

Opened in May 2021, RHS Garden Bridgewater was made possible by Salford City Council and Peel L&P. Salford City Council invested £19 million into the project which will bring substantial economic and tourism benefits to the city, its communities and the north west region. Peel L&P are custodians of the former Worsley New Hall estate where the garden has been built.

This page was last updated on 3 November 2021

Elsewhere on our site