Young people keeping out of crime

The aim of the Salford Youth Justice Service (YJS) is to reduce offending and re-offending of young people aged ten to 17.

The service is made up of representatives from the Local Authority, statutory partners including Police, Probation Service, Health, Education and a range of voluntary and third sector partners such as Early Break Substance Misuse service.

This partnership model enables the YJS to deliver timely and responsive services to young people, victims and families within Salford.

The YJS identifies the needs of each young person by assessing them through the lens of a whole family approach. The AssetPlus assessment which is the nationally recognised and approved assessment framework allows Practitioners to analyse the young person’s offending behaviour and their risks to self and others. It also enables the Practitioner to put robust plans in place to manage risk. Strengths-based and tailored interventions are then delivered over a set period of time to help the young person desist from offending. 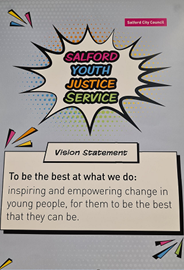 To be the best at what we do: inspiring and empowering change in young people, for them to be the best that they can be

There is evidence that early identification and intervention is much more effective at reducing offending and anti-social behaviour, than intervention when the behaviour is established and entrenched. As a result, the Youth Justice Service has established a pre-court, diversion and prevention offer.  This offer comprises of a multi-agency response to offer support to young people and their families and is being developed as part of a wider prevention offer across the city. The aim is to prevent children and young people entering the Criminal Justice System by ensuring the right support is offered at the right time.

Diversion referrals - Children or young people aged between 10 and 17 years, whose behaviour is causing concern and is putting them at risk of becoming involved with the criminal justice system can be referred to the Youth Justice Service by:

Community resolution (CR) – is an alternative way of dealing with less serious crimes that allows the police to use their professional judgement when dealing with a child who has committed an offence. It would normally seek to resolve the offence in an informal way that brings closure for the victim, where one has been identified, in a timely manner. It may involve the young person doing something that ‘puts right’ the offending to the satisfaction of the victim, and should take account of their views. A CR may also be given where, following consideration of the options available, it is more suitable than a caution.

Youth Caution (YC) – A YC is a formal notice, issued by a Police Officer and accepted by the child, once a child has admitted an offence, that cautions them not to reoffend and warns them of the potential consequences of doing so. It is used in cases, usually of relatively low-level offending, where it is not in the public interest to prosecute the child who has offended. A YC does not have specific conditions attached to it. It is, however, recorded on the police national computer (PNC) and forms part of a child’s criminal record.

Youth Conditional Caution (YCC) – A YCC is similar to a YC, but in addition has specific conditions attached that the child is required to adhere to, for a period of up to three months. If the child does not comply with these conditions then the police may choose to recommend prosecution. It is likely to be used in cases where prosecution is not in the public interest but the police consider that specific actions are required to reduce the likelihood of further offending, to protect the specific victim, or where previous out-of-court disposals have not been effective.

Salford Youth Justice Service (YJS) have a statutory duty to comply with the code of practice for victims of crime.

The code requires YJS to take victims’ needs into account in general. The YJS must:

The obligations of the code apply to direct victims, not third parties or indirect victims such as witnesses.

Parents or guardians of young victims under 17 (as long as they aren’t themselves the subject of investigation or charge) can receive services under the code as well as the young person.

Under 17-year-old victims are defined as vulnerable and qualify for an enhanced level of service.

In cases involving young offenders the police must pass the victim’s contact details to the YJS to give victims access to reparation or other restorative justice processes, unless the victim asks the police not to do so.

YJS should review and update protocols with local police to ensure this is done efficiently. The YJS must also decide if it would be appropriate to invite the victim to be involved in a restorative justice intervention and record the reasons for this decision.

Voluntary engagement in a restorative process

When making contact with victims, the YJS must explain its role and allow victims to make informed choices about whether they want to be involved. Victims’ involvement must always be voluntary. They mustn’t be asked to do anything that is primarily for the benefit of the offender.

Victims may choose not to receive services under the code at any time. The code states that the criminal justice system as a whole should be flexible and ensure victims receive the level of service they want.

If the victim agrees to be involved directly or indirectly in a YJS restorative process, the YJS must keep the victim informed as requested about the progress of the case and notify them when the intervention has concluded.

YJS may also wish to offer victims who choose not to be involved in a restorative process the option of receiving this information – this is not, however, a code requirement. The code sets out obligations for all criminal justice services to ensure victims receive information about their crime within a specified time.

The YJS must store the victim’s details securely and separately from details kept on offenders. Information on victims should be destroyed when the restorative justice intervention in a case is at an end. Information that is retained for evaluation purposes must be anonymous.

The Youth Justice Service (YJS) has an exciting opportunity for anyone who would like to work on a voluntary basis with young people who are involved in, or are at risk of, criminal behaviour.

A panel meeting takes place after a young person commits an offence and has been to court where the outcome is a Referral Order. This is facilitated by a panel of two volunteers with support from staff at the YJS. It is the responsibility of the panel members to play an active role in determining what intervention is suitable for the young person and work with the young person to put together a contract, which will put in place work that needs to be done to reduce further offending and take into consideration the views and needs of the victim.

What we require of you

All volunteers will be fully trained and be subjected to an enhanced DBS check.

If you would like further information or to have a chat about the volunteering opportunities available, please contact us on 0161 607 1900.

Restorative Justice (RJ) has been defined as a process through which parties with a stake in a specific offence collectively resolve how to deal with the aftermath of the offence and its implications for the future. RJ can take the form of victim-offender mediation either through direct contact between the offender and victim or indirect communication involving third parties. It can also involve restitution or reparation where this is agreed between offenders and their victims.

Tom is 14 years old and was messing around with his mate and picked up a brick and for no reason threw it at a passing bus. The brick hit the window causing it to smash, which resulted in injuries being caused to a passenger on the bus (Sayma).

Sayma was shocked and felt that this was targeted attached due to her ethnicity, she wanted to know why the young person had done this.

Both Tom and Sayma agreed to meet as part of a restorative meeting.

A restorative meeting took place which gave both parties an opportunity to talk about what happened, how they had been affected and gave an opportunity for Tom to make things better.

The Youth Justice Service (YJS) is responsible for the supervision and implementation of nearly all orders imposed by the youth court on young people who have been convicted of a criminal offence.

The court can also impose a Parenting Order on the parents of young people receiving a court order and this is also supervised by the YJS. The youth court can impose the following orders on a young person:

Orders not supervised by the YJS include:

Young people can be ordered to pay fines, compensation and costs in the same way as adults, with some minor differences with regard to the maximum sums permitted. The court can also order that the parents/guardian be responsible for payments.

The maximum fine for a juvenile is usually £1,000, although there is no statutory limit within the crown court. The court must consider the financial circumstances of the young person and ensure the amount reflects the seriousness of the offence.

If the court sees fit, it can discharge the young person conditionally for a specified period of time (no minimum period and not more than three years). This means that the young person must not commit a further offence during that time period.

If they do commit a further offence, they will be guilty of 'breaching' their conditional discharge and will be re-sentenced accordingly. As a result of the Crime and Disorder Act 1998, if a young person has been convicted of an offence within two years of receiving a final warning, then a conditional discharge can only to be made in 'exceptional circumstances'. This means that, in practice, few conditional discharges are now made.

This is the lightest measure that can be ordered by a court following a conviction. It implies that the process of prosecution and finding of guilt is itself a sufficient response to the offence.

Referral Orders came in to force on the 1 April 2002. The vast majority of young people appearing in court for the first time and pleading guilty are sentenced to a Referral Order for between three months and one year.

The only exceptions are very minor cases or if the court passes a custodial sentence or hospital order. If a young person receives a Referral Order they will be required to attend a Youth Offender Panel.

Panels are made up of at least two trained volunteers from the community and a member of the YJS.

Referral Order Panels are based on the principles of restorative justice:

All the above is discussed at the panel meeting and included in the contract.

The Youth Rehabilitation Order (YRO) is a generic community sentence for young people and can be imposed for up to three years. A number of additional requirements can be attached to a YRO which are aimed at managing risk and helping the child to desist from further offending.

The following requirements can be attached to a YRO: