You are here: Home / Births, marriages and deaths / Cemeteries and crematoria / Cemetery Heritage and Ecology Trail 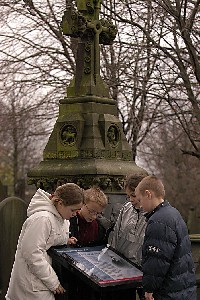 Where can you find an African prince, a veteran of the Charge of the Light Brigade, Salford's first MP, the founder of the Hallé orchestra or a victim of the Munich air disaster?

Answer: in Salford's cemeteries of course!

Just one-and-a-half miles from Salford Quays, Weaste Cemetery is a peaceful place for visitors, schoolchildren and their teachers to learn about Salford's history and some of the fascinating individuals who lived in Salford in the past.

It is primarily a place to respect and commemorate the loved ones we have lost. People also visit cemeteries for exercise and relaxation, and to study nature and local history. It is our aim to offer a fitting environment for the bereaved and also to enhance the life of the community.

Weaste Cemetery was Salford's first municipal cemetery. Before the cemetery opened in 1857 most burials took place in churchyards. Salford Corporation was one of the first municipal authorities to recognise that churchyards could no longer provide sufficient burial space and so the plans for Weaste were made.

In the Victorian age, cemeteries were considered to be amenities like parks and gardens and were usually designed in a similar way. Weaste Cemetery was no exception and its beautiful design made it the most desirable resting-place for well to do Salfordians and Mancunians.

Prince Lobengula - came to Salford from Africa at the end of the 19th century with a travelling circus type show, sent here because his father wanted him to see the world. Prince Lobengula met a Salford girl called Catherine, who died young, and he then settled with an Irish woman called Kitty. He ended up in a public grave in the cemetery. Find out more about Agecroft Cemetery.

A special colour leaflet is available that describes the trail. You can request a copy by sending an email to agecroft.cemetery@salford.gov.uk or, if you prefer, you can download a copy below.